ADVERTISEMENT INFO: PRODUCTS MENTIONED IN THIS POST ARE PR (GIFTED) AND LINKS USED ARE AFFILIATE LINKS. I RECEIVED NO MONEY TO WRITE THE BLOGPOST. PLEASE READ DISCLAIMER

Fermented ingredients have been used in Korean Beauty for centuries (and fermentation as means to preserve food is popular in many parts of the world, think Kimchi vs Sauerkraut), but the increased research on the skin microbiome and the attempt to incorporate what we learned into skincare has made people quite interested in what they actually have to offer in terms of benefits.

When I asked, there were a lot of questions you guys had, so I sat down to look through the studies and see if I could come up with the answers.
Here we go: Everything you need to know about the benefits of fermented ingredients in skincare.

To understand the process better, let’s first talk about what fermentation actually is. Fermentation is defined as metabolic process where compounds are broken down by microorganisms like yeast or bacteria into their smaller components.
This happens in our gut as we digest stuff, but has also been used as means of food preservation for centuries.
Fermentation is a very broad term though, and different things get broken down to different building blocks depending on what they are originally made of. If you ferment sugar cane for example, you get Glycolic Acid, if you ferment milk, you get lactic acid. If you ferment Red Ginseng though, you don’t get an AHA, but Red Ginseng compounds.
Fermentation is just a way of breaking down larger molecules and on its own won’t tell you if it provides you with something that will be beneficial for your skin.

Let’s look at some of the claims that are made about skincare benefits and see if there is a reason behind them.

The explanation given here is that the fermentation process creates probiotics which, when applied to the skin, nourish the good bacteria and hinder the bad bacteria. I have two videos about the skins microbiome and Pre-, Pro- and Postbiotics in skincare that I will link up in the cards, but in short: Yes, probiotics are good for some bacteria, but what a balanced microbiome on the skin actually is and how much of each kind of bacterium each individual needs at their specific point in life is still unclear, and there is much more research needed before we can even attempt any claims here. So this claim gets a:

Well, that is the definition of fermentation. We take one molecule and break it down into it’s building blocks, so new potentially beneficial ingredients are set free. I mentioned before that this is how AHAs were initially created, and we all know that rubbing our face with sugar cane will not give the same effect as applying Glycolic Acid, even though the latter is derived from sugar cane. It has to be set free first – or engineered in the lab.
The ones that come from fermentation most often are Amino Acids, Peptides, phenolic compounds and Flavonoids, but again, depend on the initial molecule to undergo fermentation.
This claims is

“Fermentation increases the potency of any ingredient”

Now if we remember that fermentation is basically the destruction of the initial molecule, you can answer that one yourself. Fermentation might make many ingredients more potent – sugar cane vs Glycolic Acid – but not any ingredient. If you break Retinoic Acid down into individual Amino Acids, it won’t be Retinoic Acid anymore and I doubt the effect of the Amino Acids will be more potent than the one of the original molecule. (More info: Your comprehensive guide to retinoids)

As it is mostly plant extracts that undergo fermentation though, this claim gets:

“Exaggerated, but in most parts true”.

The explanation given here is that breaking the original molecule down reduces molecular weight and size of the components, meaning they can penetrate the skin deeper, which increases their bioavailability. Again, this is true if the actives are the compounds you get after fermentation – sugar cane has much more bioavailable Glycolic Acid after fermentation than it has before – but not if the active was the molecule before the fermentation process. Think of having a large engine that you want to fit into a small box, if you break it down into its parts, you might be able to store all of them in the box. But then you have individual parts in a box, not an engine anymore.

What studies have found is that after fermentation of some ingredients – green tea, red ginseng, Saccharomyces for example, the concentration of antioxidant components does increase quite a bit. That can’t be extrapolated to all fermented ingredients though, as not that many have actually been studied.
Just like the one before, this claim gets:

“Fermentation increases hydration in the skin”

If you look at what most ingredients get broken down into, you will understand why that is: Many of the Amino Acids and Peptides that you get afterwards are part of the so-called Natural Moisturizing Factors, responsible for hydration in the skin. (More info: Ingredient Spotlight Hyaluronic Acid)
This claim is:

Two more things you might hear occasionally but that aren’t as prominent as the ones mentioned before is that fermentation helps the skin barrier because it makes the end product more acidic in pH, partly true because fermentation does often release acids – the German Sauerkraut means translated “Acidic Cabbage”, and that fermentation extracts have anti inflammatory potential, which is again partly true as Saccharomyces, which are often used, have Beta-Glucan as part of their cell wall lining. If they are broken down, Beta-Glucan is released and Beta-Glucan is known to be anti inflammatory. (More info: Ingredient Spotlight Colloidal Oat meal)

Is there data to back up the claims?

After looking at the claims with common sense, let’s take a closer look at the data available. As it is often the case with skincare, studies are few, usually of a small size and more often than not conducted by companies selling the products they study, which doesn’t render them useless, but has an inherent conflict of interest.

The ingredients that have been studied are:

Apart from these studies done on individual ingredients though, the main consensus in literature is that we need much more data before we can safely say which benefits fermenting ingredients will offer for the skin.

I will link my references below.

Which skin types will benefit the most from fermented ingredients

Now with all that said, is there a specific skin type that will benefit the most from incorporating fermented ingredients into their skincare regimen? That is hard to say, as I don’t think they have that one distinct advantage over other products you could buy. Any skin type could benefit from antioxidant, anti inflammatory and hydrating properties, so I think the best recommendation here is that it won’t have negative effects for any skin type, so everyone interested could give it a go.

This is by no means an extensive list, just the ones that are the best known for fermentation or the ones that I personally tried and enjoyed.

I think it is an interesting process, but not as valuable as it once was. Before the many discoveries we made that allowed us to manufacture things like peptides, AHAs or amino acids in the lab, this was a great way to boost the efficacy of your routine. But I also don’t think that there is a difference between the Beta-Glucan made through fermentation of Saccharomyces and the one made by a company through other means. If I want Beta-Glucan, or Glycolic Acid, or a specific Amino Acid, I would most likely go for a product that contains a defined amount of exactly that rather than setting my hopes on fermentation filtrate.

That doesn’t mean I don’t think they can be beneficial – for overall improvement rather than addressing a specific concern they might be great, offering anti inflammatory, antioxidant and hydrating effects – all things anyone would benefit from.
I personally will surely not shell out 185 $ for an essence to get these effects, but if I find a product I love and it has a ferment filtrate as well, that is an added benefit that I will gladly take. My routine will still be built around Tretinoin, Vitamin C and sunscreen – but some fermented skincare to fill the gaps is more than welcome. 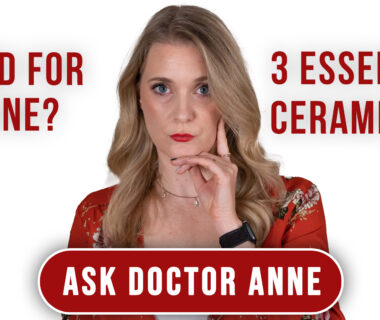